An interesting piece on bicycle ambulances in the Malawi Daily Times

An interesting piece in the Daily Times edition of Monday, February 13th offers yet another dimension on the mediocrity of 'bicycle ambulances'. While my  recent piece on the subject of bicycle ambulances, which was also echoed and expounded upon by Dadakim on her excellent Haba na Haba blog  argued about the inappropriateness of using bicycles as ambulances, the Daily Times article brings in a rather interesting dimension in that despite their continued promotion, the supposed beneficiaries are refusing to use them. One person who works for an organization that has been pushing bicycle ambulances acknowledges in the daily Times article that this technology was imposed on the people without listening to their need first:


"I think the preferences of the people were not looked into when introducing the bicycle ambulances. Sick people hate them because they equate them to hospital stretchers which are used at hospitals to carry dead bodies....Maleya said despite the ambulances being distributed, he has a strong feeling that most of them are not used."

The article ends with the interesting observation by Maleya, who is the District Aids Coordinator for Mchinji district in central Malawi that despite the strong resistance by the public to use bicycle ambulances, they "are important and what was required was sensitisation to change the people's attitudes." This is a classic case of partners and officials who think they know better than the people they are trying to serve. Considering that the people featured in the Daily Times piece are said to prefer to use ox-carts to ferry sick people to hospitals, it  is interesting that the advocates of  bicycle ambulances do not even attempt to make any argument about why bicycle ambulances are better than the oxcarts and simply claim they are important. While I would not advocate for using ox-carts as a new form of ambulances either, the proponents of bicycle-ambulances could do better in my view to support and help to improve the ox-cart ambulance technology instead of thinking they know better and will continue to push bicycles on a people that are resisting them.
Posted by Boni Dulani at 10:14 AM No comments:

My One week in Malawi part II: a wasted 20 hours on petrol queues

I was in Malawi for a combined total of 144 hours. Taking away 48 hours for sleep time, I had a remainder of 96 productive hours. Of these, I spent roughly 20 of them  queuing for petrol - only to leave empty handed at the end of it all. That is 21% of my productive time wasted.
In the end, I had to make do with petrol bought on the Mozambican road-side in Dedza, sold at MK600/litre ($3.7 at the official exchange rate or $2.3 on the thriving parallel exchange market). After failing to buy extra petrol at any of the three filling stations that received deliveries while I was in Zomba, I was forced to purchase from the parallel market yet again at the cost of MK1,000 per litre ($6.21 at the official exchange rate or  $3.84 on the parallel market) - this translated to a whopping 163% above the official pump price of MK380/litre. 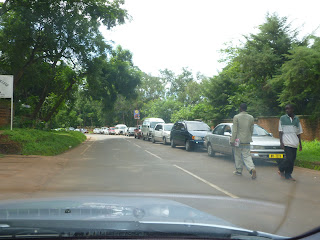 I found it interesting that at almost the same time Nigerians were on the streets protesting the removal of petrol subsidies in their country,  Malawians appeared resigned to their fate. Many motorists would 'abandon' their vehicles at fuel stations hoping to be at the head of the queue in the event of a fuel delivery. Rumours of pending fuel delivery would always be met with hectic activity, cars being driven or pushed to join fuel queues that at times extended for more than 3 kilometers. And whenever a delivery was made, it was interesting to note that many people make it a point to know exactly how much fuel has been delivered at any particular fuel station.
The greatest disappointment for me is how little blame the Mutharika government is getting for the fuel  shortages (in addition to the other myriad shortages such as forex, hospital drugs, and some basic commodities from shops). With the small Malawi middle class resorting to buying fuel on the parallel market and the majority of the blame being heaped on fuel attendants  and those who buy fuel in containers locally known as "zigubu,"  the majority of Malawians, it would appear, have taken heed of former Energy Minister, Grain Malunga's advice and gotten "used to the fuel shortages." I thus never got the sense that the Malawi government's abysmal handling of the fuel fuel shortages would result in anything resembling the Nigerian fuel-subsidy of demonstrations. This, in my view, is Malawi's biggest tragedy: the inability of people to put pressure on government officials whose job it is to ensure that these type of shortages should not occur. 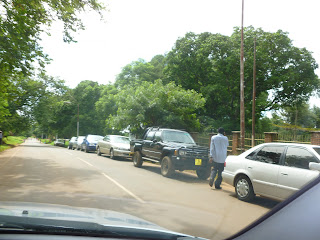 While it is true that a number of people are profiteering from the fuel shortages, these are simply taking advantage of the scarcity of the commodity to make an extra buck. If the Malawi government worked on eliminating the cause of these shortages - whose roots  lie in the acute forex shortages - there would be no thriving parallel market for fuel products. Yet it is these, not the Mutharika administration, that are taking most of the heat over the fuel shortages.

In this political environment, there is almost zero chance of the type of demonstrations that recently led to the toppling of dictatorial regimes in the Arab world. 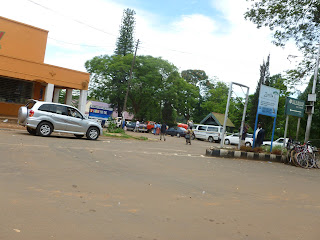