The View From Lusaka Part I: Getting around the City

THE flight from Blantyre to Lusaka on Air Malawi's ATR 42 on Sunday, September 6th 2008 was filled to capacity - and we even managed to depart Chileka 15 minutes early. I was happy to see that despite all the talk about Air Malawi's privatization, the company's business has not been badly affected. 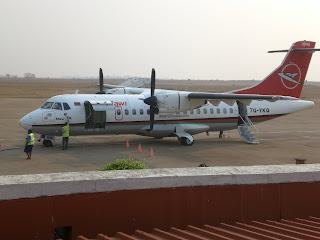 Air Malawi's ATR 42 at Chileka Airport before departure for Lusaka, Sept. 6th, 2008
Lusaka., I have to admit, is a city on the move- upwards. The road network has improved significantly in the fourteen years when I was last in the Zambian capital. Courtesy of a grant from the Japanese Government, the Great East road that takes visitors from the Airport into the center of town, has been transformed into a well lit dual carriage way all the way into town. The main townships too have had their roads linking them to the town centre well attended to. Only the smaller road networks within the townships are yet to undergo a similar facelift and continue to have the usual potholes. 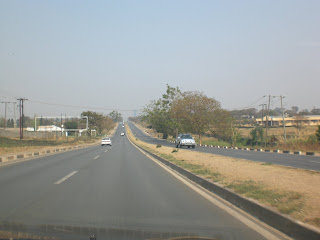 To match the new road infrastructure, Lusakans have been buying the vehicles. The traffic jams in the mornings and evenings give the impression that even after expanding the capacity of the roads, the capital requires an even more ambitious road expansion programme. While the majority of the vehicles are the usual Japanese reconditioned imports, there are also a number of super rich Lusaka residents that are driving some of the more posh models on the market. In my three weeks in the cit, I spotted three Hammers as well as a couple of Jaguars and other luxury brands.

All this is against a background of some of the highest gas prices in the region. at the time of my arrival in early September, a litre of Lusaka petrol was costing a hefty K9,646 (equivalent to about MK 420 or just under US$ 3). This was nearly twice the Malawi price of K251. however, during my third week in Zambia, the government announced new fuel prices that brought the price down by ZKW 1,800 to around ZKW 7,800 per litre of petrol- about MK 355 or $2.20. Even at the reduced prices, filling up an average tank of 45 litres in Lusaka still costs not less than $100, a factor that is forcing a good number of people to leave their cars at home and get to work on the Lusaka minibuses.

Talking of minibuses, I was equally impressed that our colleagues in Zambia have introduced measures to bring some order and sanity to the minibus business. All minibuses (and taxis) are by law required to be painted blue, and have gadgets installed that restrict their maximum speed to 80 km per hour. This, I am told, has dramatically reduced the number of ‘silly’ road accidents that used to claim a lot of innocent lives. For the visitor, the single colour code for minibuses and taxis means it is easy to spot a commercial minibus or taxi. 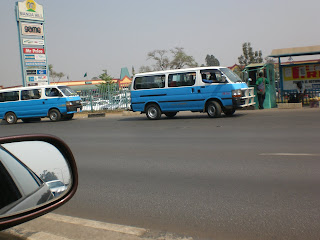 The Blue minibuses of Lusaka: perhaps not politically neutral in Malawi?

Besides transport, the indications of a city on the up are also evident in the number of new buildings that are coming up all over the city. From hotels, residential houses to the eponymous fences, it appears everyone in Lusaka is building. Property value too has gone up, with an undeveloped 10 acre piece of land selling for the princely sum of ZK 350,000,000 ($100,000)

The only place where things appear not to be moving is the University of Zambia, which had been closed since end July over a pay dispute between lectures and management. The buildings do look aged and can use some freshening up. From a purely selfish view, the closure of UNZA was a blessing in disguise, as the library was less busy and more conducive to some serious study on my part. 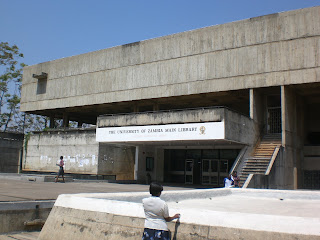 *Dedicated to my wonderful hosts in Lusaka, Evarlisto and Cynthia Simwinga and their family, who welcomed me into their home and extended to me the famed African hospitality that makes me proud to be African.

Posted by Boni Dulani at 9:57 AM No comments: