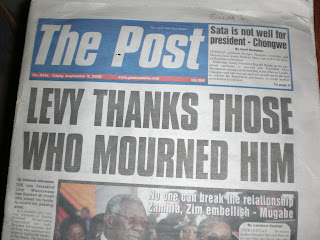 My arrival in Zambia on September 6th came exactly four days after the burial of President Levy Mwanawasa, who died on August 19th in France after suffering a stroke some two months previously. Flags flew at half post and the city was decorated with posters showing the late president.
During my three weeks in the city, newspapers and local television showed pictures of individuals and groups going to lay wreaths on Mwanawasa’s grave. It was a moving and sombre experience for Zambians, as Mwanawasa is the first of the country’s three Presidents to die.
In one interesting twist of events, Mwanawasa had pre-recorded a video message addressed to Zambians thanking them for attending his funeral. In the message, which was recorded in 2005 and broadcast on national television after the funeral, Mwanawasa points out that his actions were always motivated for the good of Zambia. The message ended with Mwanawasa saying he gave his best for Zambia until death and thanked all those who came to his funeral and condoled his family for making their grief easier. On a continent where some of our leaders think they ought to remain in office for ever, this message was not only moving, but also singled out Mwanawasa as one of the rare breed of politicians that thought about their own mortality and prepared for it in advance.


The end of the mourning period also marked the official start of the campaign to choose Mwanawasa’s successor. The elections are scheduled for October 30th, to elect Mwanawasa’s successor. The main contenders are Rupiah Banda who for the ruling MMD; the veteran Michael Sata for the Patriotic Front and the youthful Hakainde Hichilema for the United Party for National Development (UPND).

Talk on the street though is split. As Acting President, Banda, aka “RB”, is benefitting from the privileges of incumbency, including access to state resources for the campaign. Meanwhile, all manner of individuals, including Zambia’s first President, Kenneth Kaunda, have thrown their support behind Banda, who, at the age of 72, has been involved in Zambian politics for decades. Indeed, in the early days of the campaign, some overzealous individuals went as far as proposing that all Zambian political parties should endorse him to serve the country the need of going through yet another election.

On his part, Sata, who had mounted a formidable campaign against the late Mwanawasa in 2006, continues to draw a lot of support in the urban areas of Lusaka and the Copperbelt. However, people think of him as a “wounded Cobra”, having suffered a massive heart attack earlier in the year. Given the death of Mwanawasa, some Zambians are understandably wary of electing an individual whose health is in doubt. With both Banda and Sata over the 70s, the youthful Hichilema (aka HH), is the young blood in the elections. However, the UPND is struggling to shed off the perception of being a ethnic based party which will hamper HH’s ability to appeal beyond the southern province.

Meanwhile, it appears Mwanawasa’s status and legacy continue to grow even in death. All the major presidential candidates are framing their election campaign messages around who is best placed to continue with Mwanawasa’s legacy. Perhaps the biggest indication of this new fight for an heir to Mwanawasa was reflected in Michael Sata’s assertion in an interview with the Post Newspaper that he is the only person who was privileged to be told the vision of the late Mwanawasa in a two hour discussion earlier in the year. All will be decided on October 30th.