On the Publication of misleading adverts in national newspapers: The Case of Soul Winners Church, Malawi

On Saturday, December 27th, The Malawi Weekend Nation Newspaper published a full page advert from "Soul Winners Church" advertising "miracles, miracles, miracle and more miracles at the 'church's end of year service on December 31st. The Church claims people will be healed of various ailments, including HIV, blindness, barrenness among others. 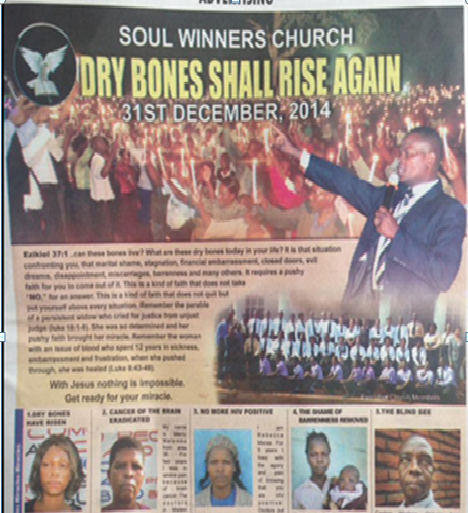 I responded to the claims in the advert by posting on twitter asking whether media houses should accept adverts that have the potential to mislead....this generated a lot of discussion and debate on Saturday morning. Among others, @jkainja: @mynassah; @andrewlikaka88; @KoheiPearsonX; @newsmalawi; @chimhenz and @jodeet weighed in and offered their take on the issue: 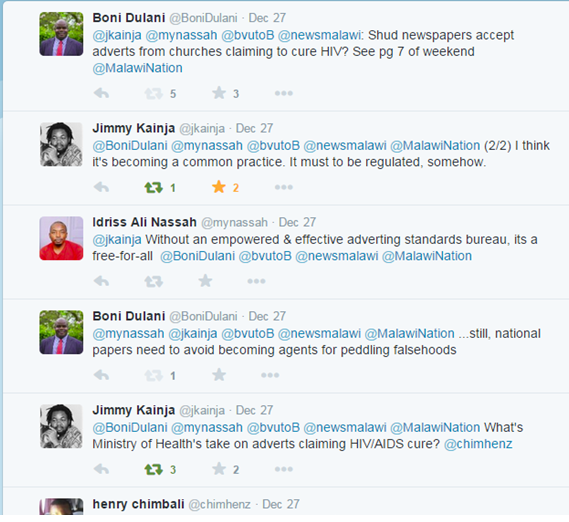 In the end, @jodeet proposed that we draft a letter to the Nation Editor to express our concerns. The letter is attached in full below:

We, the undersigned, are writing to express our deep concern at the increasing frequency with which your esteemed Newspaper has been publishing adverts whose contents we believe are at times false and grossly misleading to the public.

The most recent such advert appeared on page 7 of the Weekend Nation of Saturday, 27 December 2014. In this advert, a religious group calling itself 'Soul Winners Church' is promising healing miracles from various ailments, including cancer, HIV/AIDS, barrenness and blindness.

While it is by no means our intention to impugn the value of faith healing, we are motivated purely by the desire to guard against the publication of messages that have the potential to put the public in danger. By publishing these types of adverts, whose veracity is nothing more than the word of those who place them, you might inadvertently be giving credibility to conmen that seek to trick people at their most vulnerable time.

At a time when the country is making progress in containing HIV/AIDS, the advert cited above quotes 'testimony' from an HIV/AIDS patient claiming taking anti-retroviral drugs made her life "miserable." To our knowledge, anti-retroviral drugs remain the only effective remedy for HIV/AIDS. We are thus hugely disappointed that a newspaper of high repute like yours can publish unsubstantiated claims that the lives of HIV/AIDS patients will get better after they stop taking their drugs as the advert seems to suggest.

In the same note, we find it archaic and outdated thinking that women who are unable to have children are portrayed in the advert as living a life of "shame."

While we acknowledge that newspapers need to generate advertising revenue to survive and to deliver news at affordable cost, we strongly believe that this has to be balanced with the equally important duty of educating and informing the public in a manner that does not mislead. This includes the responsibility to ensure that material that appears in the newspaper, including advertisements, are neither false nor misleading.

We are of course aware that other media houses publish and broadcast similar messages, but we felt we needed to write you because of your unique position as the country's  leading print media house.