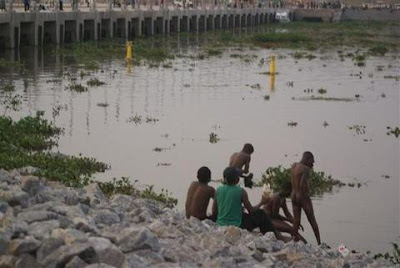 On 23rd October 2010, Malawi’s wise and dynamic leader, Ngwazi # 2, Bingu wa Mutharika, opened the Nsanje World Inland Port in the presence of the Presidents of Zambia and Zimbabwe (bringing back memories of the potential revival of the old Federation of Rhodesia and Nyasaland?).

Even if the small and unresolved issue of a feasibility study had not been conducted, the all-knowing reincarnation of the Ngwazi commissioned the start of the construction of the port at a reported cost of K3.9 billion. Well, even the simple fact the Mozambican government – in whose territory most of this new 238km route to the Indian Ocean passes - had not granted their full authorization for the project, Mutharika went ahead and invited his federal colleagues to join him in launching the project on that sunny and hot October morning.

It is now almost four months since that colorful launch and no single ship, nay, boat/badge is yet to arrive at Nsanje port. And if the above picture of the port taken in January 2011 is to be believed, no badges will be docking at Nsanje port in the near future.

At least the people of Nsanje have found other uses for the port.

It will be at least ten years, if ever, before the port can be used. My informed guess says 'Never'. It's all pie-in-the sky. The problem is that our civil servants will not tell the President the truth. Anything he dreams about - they will confirm that they can make it happen. It's his fault, though, because he is obviously so sure that he knows anything that anyone else who disagrees is seen as an enemy!

Boni.
Cry freedom to our mother motherland. I wish you and other well in the United States I could have given you some contacts in Germany but your email is not avialble to write some private messages to you and network for the "death" of bingus regime